Your journey from Paris to Versailles just got a whole lot classier, complete with ceiling frescoes, marble columns and palace gardens. 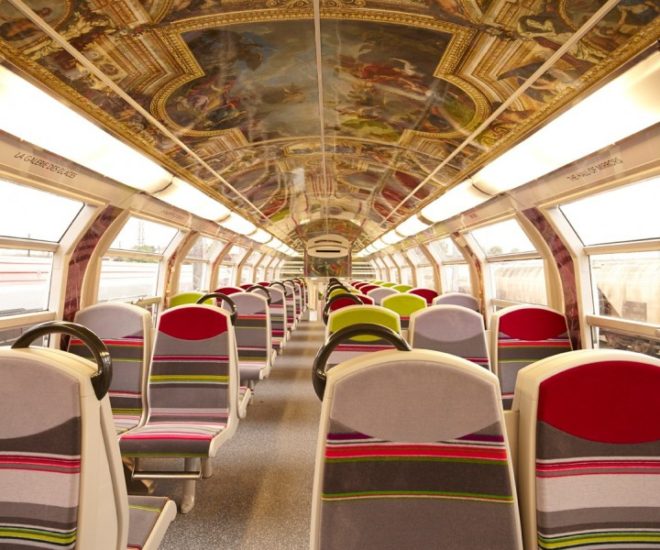 The next time you happen to be on a train in Paris, don’t look out. Direct your gaze, instead, to its interior, because you’re in for a very pleasant surprise. The usually unassuming décor of the trains running along the suburban RER C train lines have been ditched for a more sophisticated rendition of the Palace of Versailles. Available on board five trains under the SNCF, France’s national rail network, the cabins have been plastered with trompe-l’oeil images of the royal chateau. The refurbishments are designed to evoke memories of the palace and its grounds. Famous sites such as the Hall of Mirrors, the Gallery of Battles and Louis XVI’s royal library have been layered on with a high-tech plastic film. Such a project isn’t a first for the SNCF though. The rail company had a similar initiative in 2012 with Art in Transit, a collaboration with 3M that transformed train cars with Impressionist art and a train station with stain glass inspired by the Musée d’Orsay.

Taken by about 500,000 passenger a day (of which 10 percent are tourists) the train is en route to 36 stations along the RER C line, which runs through five departments: Paris, Hauts-de-Seine, Val-de-Marne, Essonne and Yvelines. The makeover was no mean feat – 10 full-time employees, including an engineer, quality control supervisor and eight technical specialists were required to apply a staggering 941 panels of film to the train’s interiors with utmost precision. A small price to pay though, for a travelling experience you’ll never forget.