Bose QuietComfort 20 are the first in-ear headphones from Bose to offer the noise-cancelling technology. 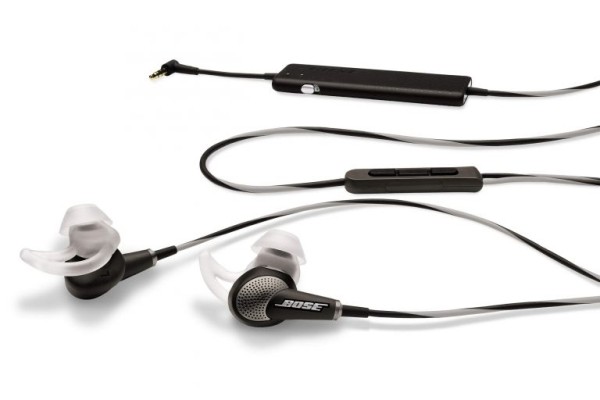 Bose’s latest noise-cancelling headphones make sure listeners can enjoy their music while staying alert to the sounds of the world around them.

The first in-the-ear headphones to feature the Bose technology, the QuietComfort 20 headphones are optimized for use with portable, digital devices and for actively expanding the bass and middle frequencies usually lost through the compression of mp3 and other digital music file formats.

They are said to be the world’s first active internal and external noise-cancelling earbuds — which work by generating equal and opposite sounds to those surrounding the listener rather than acting as earplugs — a tactic that actually serves to amplify internal sounds such as the vibrations created from the wearer’s own footsteps or jaw movements.

The new headphones are also the first from the company to feature an ‘active’ mode which, at the press of a button on the cable, continues to purify the sound quality of a track, but also allows the sounds of the outside world in so that the listener doesn’t accidentally walk out in front of a car or miss an announcement when waiting for a train.

Bose may not be the ultimate audiophile’s choice of headphone, but there’s little doubt that when it comes to acoustic and noise-cancelling technologies that make it easier to enjoy music without external interruptions and without cranking the volume up to 11, the company has no real competitors.

Its technology is so mature and well-developed that auto makers such as Cadillac now use it as part of their in-car infotainment systems to stop engine noise, wind and tire roar permeating their cars’ cabins.

The QuietComfort 20 headphones also feature a built-in microphone and control buttons for taking a call and are compatible with Android, Windows Phone 8 and BlackBerry smartphones.

For iPhone, iPad and iPod owners, Bose produces the QuietComfort 20i, which is essentially the same product but with a customized headphone jack specifically for iOS devices.

Powered by a battery that should last 16 hours between recharges, the headphones will still function as standard earbuds if the battery runs flat while in use.

Of course, Bose isn’t the only company to offer noise-cancelling earbud headphones. For the same price, Denon’s AH-NC600 earbuds claim to eliminate external ambient noise by 99%.

However, what sets Bose’s earbuds apart are their internal microphones for monitoring, cancelling and purifying internal sounds for the widest spread of high and low frequencies.

Another difference is its battery: Denon and Sennheiser’s noise-cancelling units run on a replicable AAA-sized battery, the weight of which can pull the earbuds out of the wearer’s ears, while Bose has finally adopted a lightweight lithium ion rechargeable battery cell to eliminate this problem.

Due to go on sale in the US this summer, the QuietComfort 20 headphones will be available direct from Bose.com for $299.95.