Representing a new generation of breakthrough artists in the Indonesian art scene, Luh Gede Gita Sangita Yasa, not only a fresh graduate from the Teknologi Institute of Bandung, but also a needle in a haystack. Realising her dreams and purpose much sooner than most, Luh Gede was quick to make the necessary life adjustments in order to achieve her goals – which have since paid off, considering her swiftly escalating recognition. Worth every bit of the attention she’s garnered, Luh Gede’s immaculate oil paintings, effortlessly induce a sense of youthful serenity and excitement. Born in Bali in 1997, you graduated from the Teknologi Institute in Bandung, majoring in Fine Arts. And we can already see your art exhibited in galleries across Asia – that is fast ! Tell us more about your first steps as an artist?

That sounds like an overstatement, but I’ll take that as a manifestation mantra.. Graduating in the middle of the pandemic actually sucked, I took a long 3 months rest after the chaos of my final project in university then started working as a graphic designer in 2 different start-ups but quit after a month each. I could say I was bored, lost and had nothing to do but to get a job since all my art supplies were still locked in my campus studio. It was not until I faced the stress of an office workload that I realized, a 9-5 isn’t really for me nor is it personally fulfilling, I just don’t vibe with the whole rush. So, yeah I saved up, rebuilt my brush and paint collections, and took some small commissions. I’m still working out how to readjust things that work and don’t so yes, I am just starting to paint very slowly these days. “Fragments of memories”, this is how you describe many of your large format paintings. Tell us more about this work on memory and your latest series entitled “Paradiso”.

I daydream a lot. Sometimes I can’t tell if the pictures playing in my mind are from a distance past or if it’s a made up. I think it has something to do with my desire. Often times I found myself having an image of a perfect situation, a perfect person, anything. A desire for alternate realities, can be a future or just simply a dream. The Paradiso series actually has an explanatory title in Indonesia, “Paradiso: Sebuah Sandiwara Waktu ”. The Fragments here is translated into “sandiwara”; a play, like in theatre. Times play the play. The past and the future merging; creating the present on the canvas. The tensions created, that’s just simply how the broken record of memory and the ever so ideal future be haunting my mind. Like in one of my painting; “Boys in Canggu”, there are these 2 ghosts like form and honestly I didn’t know why I put it, I thought it was just funny and aesthetically made everything balanced but when I painted that part I was like “oh man, this whole concept of the painting I do feel like a ghost, instead of tryna be in an actual reality I watch people in my own dimension”. 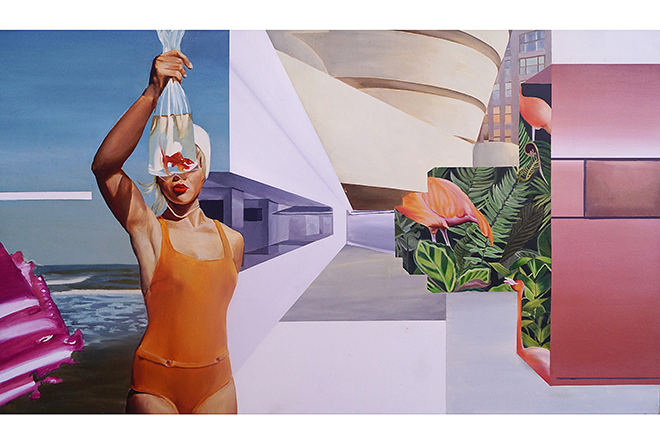 Any current or past Pop Art artist who has influenced you? Has British artist David Hockney inspired you?

Hockney was a popular artist to take reference from in my year when I was in university, I guess people see similarity in the subject matters that we brought up; tropical images and pools but in my early days of painting I was fascinated by how James Rosenquist used Montage. Could actually drop countless names, in the last 4 years since I first started using oil I’ve gathered references from Justin Mortimer, Phil Hale, Luo Ross, David Salle to Kei Imazu. I saved so many arts on my instagram and other arts that I found interesting. I even painted them again in some of my paintings to make my own narration. My interest is too broad, I like my approach to painting now, combining “a bit realistic” images, flat area and a bit of abstraction. I plan to add more abstraction and expressive strokes in the future to emphasize the chaotic effect. Visually I want both chaos and balance in my paintings. The blank space either they are white or simply flat areas on the canvas are there to give visual break, like an interlude in a hip-hop album. You mentioned several times that the evocation of Bali can bring out many “clichés” which you do not want to be associated with. Yet you live in Bali and love the island life. Tell us about the Bali you cherish and call home?

It’s like a love-hate relationship. It becomes annoying when most people are projecting their preconceived idea  when I say that I’m from Bali. they would have this image about spirituality, traditional balinese paintings and all. At the same time I cannot run away from my identity. Not that I hate my ancestors, but these days, I realise the very core of my cultural background it’s so fluid. It has the potential to stay true to its core whilst also following modernity. So, it’s cool I guess. 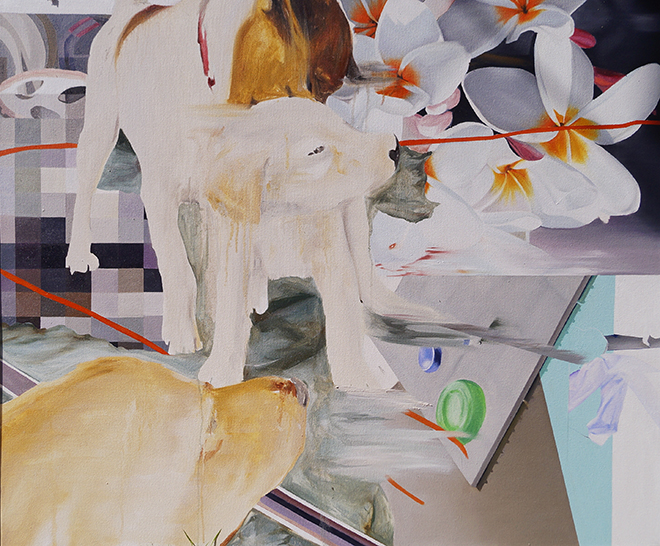 How do you view the current art scene in Indonesia? How important is the space given to artists in modern Indonesian society?

Been seeing the major artspots in Jakarta, Bandung and Jogja and I have to say my hometown is a bit late in upgrading the archival system and decent spaces for contemporary arts. Compared to those cities I think Bali has a different approach, the art space is often combined with other lifestyles activities. I worked as an intern in a gallery and I noticed the ecosystem is not so pretty like its reputation. And of the spaces, can’t say we lack of it but geographically it can be quite frustrating. Space is so important for me, where you show your work can show your value, not to mention how the artworks and the space can be more aesthetically pleasing by responding to each other. I think artists these days are given more chances to show their works in public spaces like the mall, a monument and stuff. It gives room for people to start a conversation by seeing but also critics for the artists. Art workshops and therapy are growing too, it’s just nice seeing how art has become a medium for healing in this vast modern world. Can’t find the right work to say it in English but; suka melihat seni bisa memanusiakan manusia, because we tend to get overwhelmed by the city’s life and here we have artists asking us to be in touch with ourselves and our surroundings. 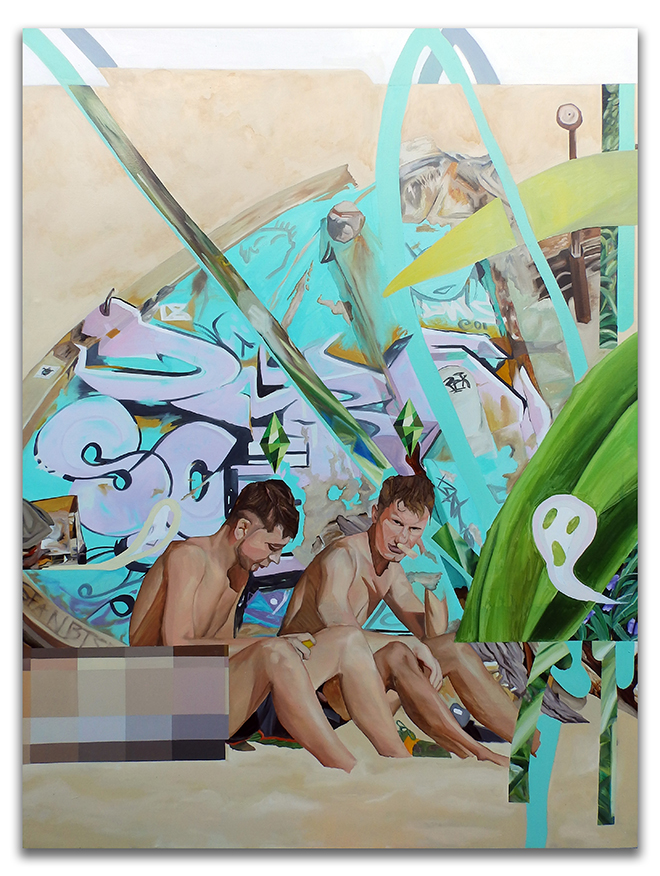 Can’t say an exact place, but I’ve been working on few new paintings so let the wait-and-see begin! In the meantime you can check my previous group exhibition at Gajah Gallery. For now you can see them on my Instagram! I post snippets and partial pictures of my paintings there! Your favourite museum in Indonesia?

I’ve been to Jakarta alot and sadly in those countless times I haven’t gotten the chance to visit MACAN despite how desperate I was at everytime. So I guess Galeri Nasional Indonesia, they have so many artworks from old masters like Raden Saleh to more contemporary artists, they also have friendly guide with e-catalogue for some works. They hold exhibitions for established artists too from the country and outside Indonesia. You should go there sometimes, I think they installed the artworks based on the development of Indonesia’s art scene from the colonial. 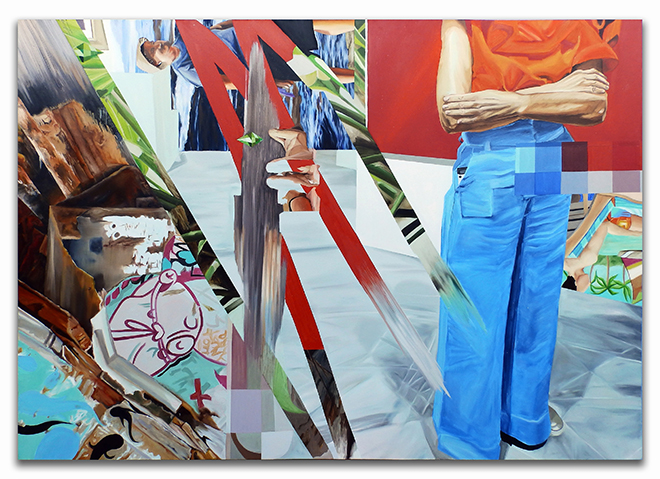 Alot. When I was a child I was so intrigued with Van Gogh and children/fantasy writers, they would have these cute illustrations on the book; it was done so technically fine and precise but also not too realistic; I tried to copy it. From my hometown I also admire Antonio Blanco’s artworks, they are so beautiful and graceful, when I visited his museum I thought, “your art can open access to anything uh” as I saw his pictures going around the world and hanging out with Michael Jackson. That’s dope for that time. As I grew older I worked as an artisan for several artists and I just love hearing their stories and approach to life; how to cope with anxiety and to be yourself and express it through your art. I dont have the balls to name them all but I thank these 5 artists whom I’ve been an artisan for during my study. But as I came out from art school I realized my professor helped me so much by understanding my works that everything must not come in chronological order. That maybe by seeing the final artwork you’ll realize where you come from instead of being ingrained on an idea from the get go. It also gives me the freedom to develop and change whatever I want in the creating process. Whatever that fits at the moment.