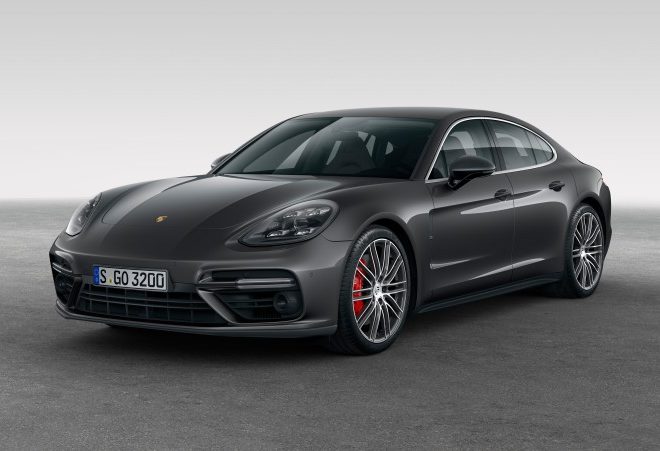 Having contributed to record sales for the German automaker since 2009, it was only high time the trusty Porsche Panamera got the facelift it deserved. This year, the liftback-style sedan replaces the previous model with a sportier façade and amped-up specs. The new Porsche Panamera will launch with three engine options; the most powerful 4.0-liter V8 Turbo’s 550 hp will power the car to 60mph in 3.8 seconds, or 3.6 seconds with the optional Sports Chrono pack. Porsche’s brand new 2.9-liter twin turbo V6 in the 4S model will get you 434hp (20hp more than before) of driving pleasure, and is capable of hitting 60mph from rest in 4.2 seconds with the Sport Chrono pack, and the Panamera 4S Diesel’s V8 (fastest diesel car in the world, Porsche claims) will equip your ride with 416hp and hit a top speed of 177mph, going from nought to 60 in 4.3 seconds. Otherwise, the four-wheel drive model is also equipped with Porsche’s eight-speed dual-clutch automatic transmission shift gearbox, automatic rear wing and next-generation air suspension for an even smoother ride. But what is a fantastic ride without all the nifty gadgets we’ve come to expect from the luxury-grade vehicles of today. Drivers of the new Panamera will work with the new Porsche Advanced Cockpit, equipped with thermal imaging cameras and InnoDrive, an adaptive cruise control. The improved UX features two new 7-inch displays in place of dials, with a 12-inch touchscreen that has all the works – online sat-nav, Apple CarPlay and an updated voice control system.

“Its strengths have been reinforced, its weaknesses eradicated and above all its character preserved,” said Michael Mauer, Head of Style Porsche AG. If you’re still not convinced, Porsche has created a video that will surely seal the deal: