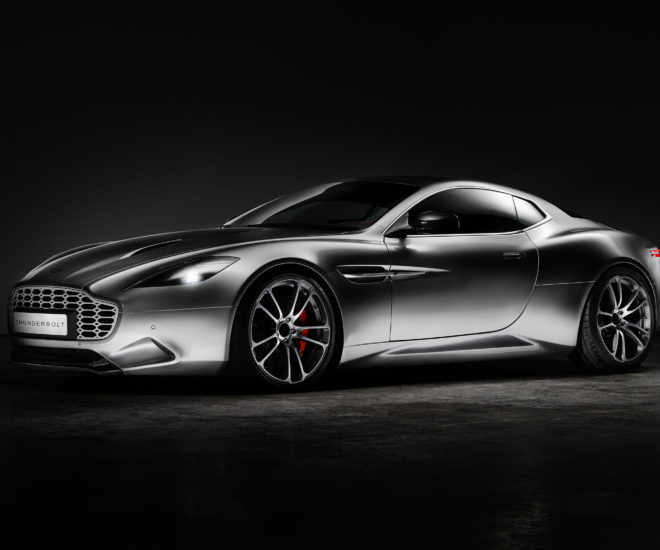 The new car is called the “Thunderbolt”, and officially it’s still a concept though a limited production run could – and likely will be initiated

The exterior, which favors angles over curves, is almost entirely carbon fiber — except the curved roof, which is tinted glass. The front and rear headlamps are also bespoke, as is the rear wraparound windshield. Look hard enough and the Vanquish is still there, but so too are all of Fisker’s famous design approaches.

“I wanted to create an elegant beautiful GT sports coupe, with pure emotional sculpture, that would stay timeless,” said Fisker.

The front grille is much larger and more pronounced, as is the brightwork and the car does look elegant yet slightly menacing, sitting some 15mm lower to the ground than a normal Vanquish and on 21-inch alloy wheels. Inside, the leather trim is courtesy of premium Italian furniture makers, Natuzzi; there’s a special skeleton Chronograph clock in the center console built by Swiss watch maker Maurice Lacroix, and it is the first car in the world to feature a curved, free-standing touchscreen.

The 11.6-inch display is a prototype designed to be viewable without glare at any angle, developed by Panasonic in collaboration with Fisker. Fisker has no official plans to put the Thunderbolt into production, although he said this week that a positive response to the concept could see a limited number built for customers.