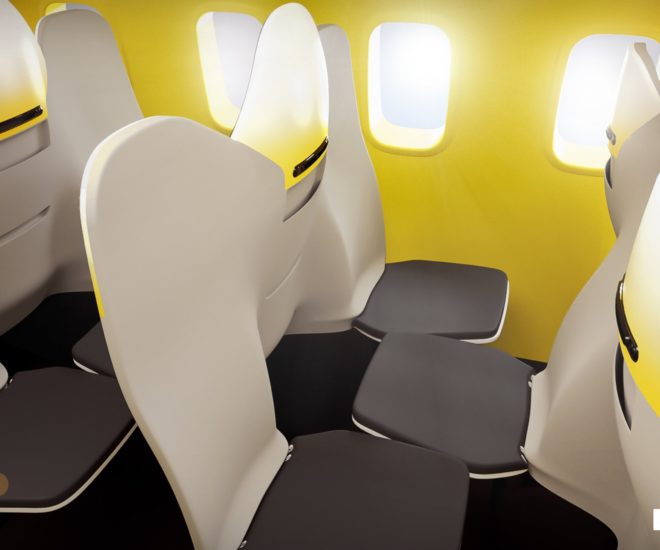 It’s only a proposal, an “exploratory concept” that would force flyers to face each other in-flight. But already, the patent is drawing the ire of the Internet with critics using words like “nightmarish,” “horrifying” and “evil” to describe the reimagined cabin configuration.

Because in its designs for the Economy Class Cabin Hexagon, French firm Zodiac Seats proposes turning the middle seat around so that flyer is forced to face his or her seatmates throughout the entire flight.

The logic? Reconfiguring the cabin’s traditional forward-facing rows into an hexagonal design would add 30 additional seats, eliminate fights for the elbow rest and give passengers up to four more inches of legroom.

But the idea of having to spend the duration of a flight trying awkwardly to avoid eye contact with seatmates is enough to draw howls of protest and indignation from the Internet. In fairness, the proposal is meant for short-haul flights. But that doesn’t seem to dull the reactions to having to look seatmates in the eye.

“Evil plane seat design would ruin whatever good remains of air travel,” writes The Verge, for example, which pulls out all the stops in describing the plan, calling it everything from “nightmarish” and “dystopian.”

Furthermore, the concept would exponentially increase the potential for “rampant butt touching,” they point out.

But could a plan for aft-facing airplane seats really be any worse than bicycle-saddle seats?

Because last year, a similar scenario played out on the Internet when we got wind of another patent that proposed turning traditional seats into bike-style saddles to cram more people onto the plane.

The seat was described as a “torture device” and “terrifying” and “painful.”